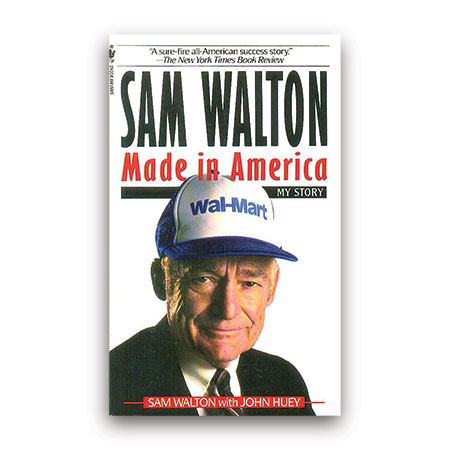 PEMBROKE, Mass. — I recently read Sam Walton’s autobiography titled Sam Walton: Made in America. The book was written by the Wal-Mart founder with John Huey, then an editor for the Wall Street Journal, and came out a few months before Walton’s death in 1992.

Now, the Wal-Mart story is a familiar one, but Walton’s career offers not only examples of business success but is inspiring and uplifting. Everyone can learn from the book.

Born in lower-middle-class circumstances in rural Oklahoma, Walton exhibited a strong work ethic and business savvy from a young age, once winning a contest by selling the most newspaper subscriptions.

After graduating from the University of Arkansas and doing military service, he went to work for the Ben Franklin Variety Stores. After a few years, he became a franchiser. With his brother Bud, his retail shop grew, and before long, he was running a multi-store chain. But he disagreed with Franklin management about the future of retailing. He believed the focus should be small-town locations and extreme discounting. He opened the first Wal-Mart store in Rogers, Ark.

In time, Walton had 15 stores. It soon became apparent that he needed a distribution system to expand. In fits and starts, and ultimately aided by operations guru David Glass, he developed a warehouse distribution system cluster approach that has enabled the company to grow.

The dollars-and-cents results over the years speak for themselves:

Of course, today, Wal-Mart is the largest company in America. Its sales figures are really beyond our comprehension. But let’s see what small businesses can learn from this remarkable businessman and his amazing success story.

He started work at 5:30 each morning. His energy level was non-stop, peripatetic. Whenever he found a great bargain, he would make the purchase, and put it out in bins in front of the stores. Increasing sales was his lifeblood. He never stopped trying to get bigger, and he was never satisfied.

Most of us, after a point, become complaisant. I know when I owned my business, years and years ago, I was driven to succeed. I hungered after sales, because every sale was necessary for survival. After a while, every sale was necessary for success. But, at a certain point, I became prideful. I had a good business. I lived a good life. I wanted to increase sales, sure, but I wasn’t hungry for the increase.

LESSON: In your drycleaning business, never rest on your laurels. Always go for more. If you have a busy plant, open a second one, and make that operation successful. When that is successful, build up a specialty such as commercial volume, and add a third plant.

WALTON WAS UNFAILINGLY POLITE TO EMPLOYEES

He was not a yeller and screamer. But he was a tight coil of energy, which kept him always on the go and his employees perpetually busy.

For instance, when he set up buyer visits to New York City, Walton and his eight buyers would all sleep in one hotel room to keep costs down. He scheduled both early-morning and after-hours visits with vendors to keep everybody busy from 6 a.m. to 10:30 p.m. His buyers must have come home quite exhausted but filled with pride in all the consummated deals.

LESSON A: Eliminate every unnecessary expense and always try to get costs down. For instance, if your residential route driver has a cell phone that carries $100 monthly charges, seek out less expensive options. Or even better, get a prepaid cell phone at $100 a year.

LESSON B: There is no 9 to 5 for dry cleaners. Your people can work more hours. If there’s work to be done, they can do it. Figure out a way to pay them without creating an elaborate overtime system.

When I owned my business, three or four of us would typically be there until 7 nightly. These weren’t executives, but order processors and salesmen. Since everyone was on salary, I would go around giving a crisp $20 (remember, this was the 1970s) to everyone who worked overtime. Sometimes we went out to share a pizza afterward. My people lived this existence because they were rewarded and knew they were appreciated.

WALTON WAS NOT AN ORGANIZED PERSON

Rather, he was a man in perpetual motion. With enormous growth—often 30-40% annually—Wal-Mart suffered organizational pains. In time, Walton hired Glass and gave him carte blanche to do whatever was needed.

LESSON: Know that you can’t do everything, and that you have weaknesses. Hire good people who complement you (your weaknesses are their strengths and vice versa) and let them run free. If they disappoint you, replace them with another competent manager and give him/her full responsibility. In that way, you’ll wind up with a competent team.