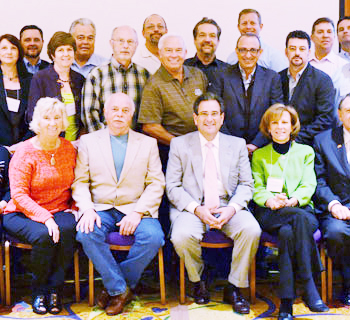 LAUREL, Md. — What happens in Vegas doesn’t stay in Vegas, says the Drycleaning & Laundry Institute (DLI), when what happens is learning. And the association’s recent Five-Star Management Conference, held in Las Vegas last month, was a “mind-expanding” success.
Operator Dan Miller returned from the conference with a headful of ideas. “There were so many things, it’s difficult to list them all,” he says. “We definitely will be focusing on online marketing and using Facebook more effectively.”
“More than 1,000 years worth of collective drycleaning experience was in that room,” the new operator says of the conference. “It was fantastic to have the opportunity to get insight and feedback from second- and third-generation cleaners who have been through everything.”
The conference attracted more than 50 participants from plants throughout the U.S. to the Wynn for three days of seminars and networking. Presentations included a discussion of the new SystemK4 from Kreussler, “Recession Busting Ideas” with Steve Strauss, and Bill Bohannon’s talk on labor costs.
DLI also presented its rebranded Award of Excellence (AOE) program and Seal of Approval. The Seal comes with extra perks for participants, DLI says, such as a one-on-one marketing consultation with branding guru Al Lautenslager.
David Suber and Barry Gershenson discussed the advantages of Sunday hours in making your company more accessible to customers. John Howerton, of Navman Wireless, talked about the advantages of GPS units in route trucks. And Five-Star favorite Frank Kollman discussed new healthcare requirements and reliable practices for hiring and firing.
Asked to rate the speakers and venue, attendees were enthusiastic. “Come back to the Wynn,” one wrote. “DLI did a great job,” says Milt Chortkoff of Milt & Edie’s Drycleaners in Burbank, Calif. “Best Five-Star ever,” says perennial attendee Allan Johnson.