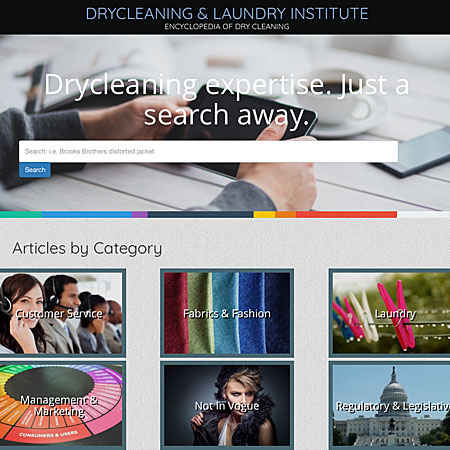 A drycleaning ‘library’ in your hand

LAUREL, Md. — This straight from the Drycleaning & Laundry Institute (DLI) website: “A new web interface and mobile app for the Encyclopedia of Drycleaning puts the entirety of DLI’s vast stores of knowledge and research at members’ fingertips,” writes Ian P. Murphy describing the app, released earlier this summer at the Clean Show.

Members know they can turn to DLI whenever they have a question about any facet of running a drycleaning business, Murphy writes.

“After more than a century of helping operators succeed, the association has witnessed and handled nearly every situation a fabricare professional might encounter—and what’s more, it has researched and written about it,” he points out.

This comprehensive reference is the repository of that knowledge, he relates. Included in Silver-level and higher memberships, it is a members-only feature that contains the many thousands of articles, advisories, and other releases the association has produced over the decades.

There are sections such as: TABS, Not in Vogue, Counter Sense, Marketing Methods, Management Matters, plus exhaustive reports and advice on topics such as wet cleaning, drycleaning, finishing, shirt procedures, counter service, insurance, regulations, and more, he notes, saying, “it’s an indispensable resource for anyone and everyone involved in fabricare.”

The original volume was a library of printed matter, Murphy says. “More recently, DLI digitized its documents, put them on CD, and introduced a keyword search. Now, a new web interface and mobile app will allow member cleaners to access the entire DLI knowledge base at any time, from practically any location.”

“We upgraded the search,” says DLI CEO Mary Scalco, quoted in the article. “All of the information on there is the same, but sometimes the jargon or words used by our members are not necessarily the same words as we would use in the bulletins when we wrote them.”

She gives an example: “‘counter help’ or ‘counter person.’ We would call that person a customer service rep. Or we would call the spotter a ‘stain removal technician.’ In the app, we call them a spotter.”