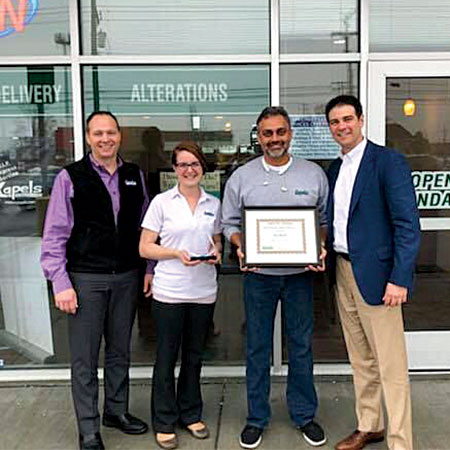 “One of the most impressive individuals we have worked with,” says CEO Dubois

“Within a few years, he established a network of drycleaning stores in the metro Detroit area and developed a system for expansion and growth,” Dubois adds.

“I guess you could say I like to stay busy,” says Desai, who co-owns his cleaning locations with a partner from his company, Shambho, LLC.

Desai immigrated to the United States in the early 2000s.

While working as an IT engineer, he began his career as an entrepreneur by purchasing investment properties in the metro Detroit area, Lapels notes.

He later branched out to franchising with Great Clips. In 2014, he and his partner at Shambho, LLC signed a development deal for up to 16 locations in the metro Detroit area.

The first store and drycleaning plant in Rochester Hills opened in October 2015 as did its satellite location in West Bloomfield.

“One thing I’ve learned during my time as a business owner is you are often only as good as the team you work with,” relates Desai.

“My partner and I have been very fortunate to have a great team led by our operations manager Tiffani Probst, whom I have worked with for 10 years” Desai adds.

“As for the franchise owner of the year, it’s quite an honor and I do give credit to Tiffani for her amazing leadership and her team,” he indicates. “We’ve had a great relationship with Kevin and the Lapels team.”

For winning franchise owner of the year, Desai received a trophy, plaque and cash award, which was presented by Dubois during a training dinner.