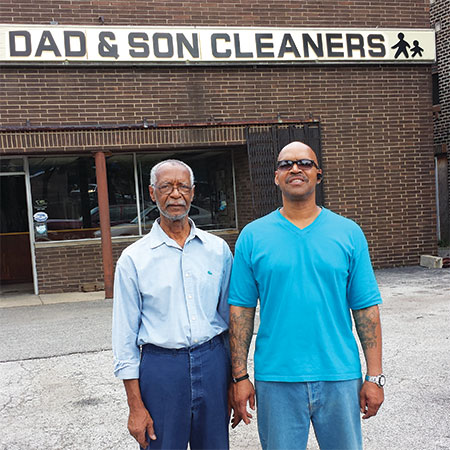 James Earl owns and operates Dad & Son Cleaners with his son, Jeffrey. Before James Earl was the “Dad” of the family business, he was the “Son.”

James Earl Halsell was still in high school when he started in the drycleaning industry in the ’50s, sweeping and doing odd jobs around his uncle’s dry cleaner. The part-time job introduced him to the industry in which he would work the rest of his life.

After James Earl graduated from local East Tech High School in 1958, his father, James Clyde Halsell Sr., asked him if he would like to open up a dry cleaner with him. The elder Halsell was working at Republic Steel at the time and knew of a woman who was interested in selling her drycleaning business.

Thanks in part to James Earl’s background in dry cleaning, the two Halsells made a good team when purchasing the business and named it Dad & Son Cleaners. That same year, in July, James Earl became a father himself, naming his firstborn son after his father.

“In 1958, there was approximately 16 cleaners in the area,” James Earl Halsell recalls. With their work cut out for them, the Halsells labored hard, leaning on quality service and hospitality to make a name for themselves with customers.

Over the years, Dad & Son Cleaners made plenty of loyal customers whom the Halsells say spread the word of their business to friends and family.

“We have had customers that have passed on, and their sons and kids have come in to continue to support us. Even their grandkids support us,” James Earl says.

Dad & Son Cleaners covers 1,800 square feet and is equipped with a Firbimatic drycleaning machine, two Hoffman/New Yorker presses consisting of a legger and a utility press, and a Cissell form finisher and puff iron.

Of the approximately 2,000 pounds of garments processed each week, about 75% are dry cleaned.

Many customers place so much trust in their service, Halsell says, that they will sometimes come in with their clothes in a bag with no tag and simply tell him that they will be back to pick them up. When the customer returns two or three days later, they will find all of their clothes done the way they needed them, he says. If a loyal customer asks, they will even deliver the patron’s garments to their home.

With customers from all generations of families in the area, over the many years, Dad & Sons Cleaners was able to beat out the competition, Halsell says, and “now is the only dry cleaner in the area.”

CHANGES OVER THE YEARS

Their success can be partially credited to a 1970s change of location to a different store not far from the original on Wade Park Avenue. The Halsells decided to move roughly a mile east to 9301 Wade Park Ave., across the street from the site of a new shopping center being built.

The company took advantage of the traffic generated by the shopping mall, yet was still able to keep all of its loyal customers.

Today, James Earl says that he still talks to his father in spirit and receives guidance to get the job done around the business.

“Whenever there was something to be repaired or installed, we did it together, and I learned from him,” James Earl says. “And now when I run into a problem, I say, ‘OK, Pops, what would we do to get this done?’ and he would tell me to check this out, and do this, make sure that this is correct, and it works.”

Most recently, James Earl suffered another loss when son James Clyde died in August 2013 at the age of 55.

Son Jeffery, 54, returned home to Cleveland from Los Angeles to cover his older brother’s position in the company, and has become the “Son” in Dad & Son Cleaners.

Jeffery hasn’t been in the business long, but he’s hit the ground running, learning from his father just as his father learned from his. He’s working hard to fill the shoes of his grandfather and brother.

James Earl reflected on his years so far in the industry, and passes on to others that, “Today, people are busy; husbands and wives are both working, and there is little time for them to do their laundry and dry cleaning. And if there is a plant that is available at a reasonable price that has dependability, they will bring their garments to you, so they can have their own leisure time.”

James Earl and Jeffery Halsell, with the help of a “repair lady,” work with no end to the company in sight.

As the Halsells continue to run the cleaners born some 56 years ago, the more things seem to change for them, the more they seem to stay the same.

Charlie Thompson II interned with American Laundry News earlier this year and is pursuing a degree in professional writing at Michigan State University.