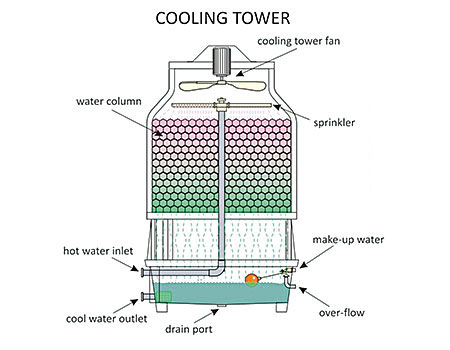 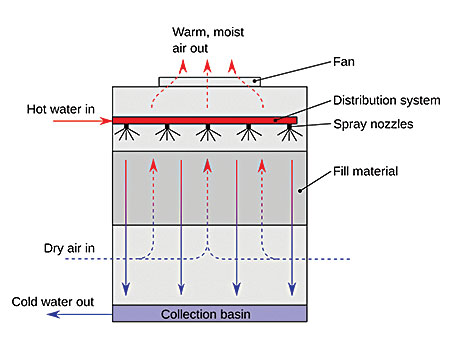 More about how cooling towers work

RANDOLPH, N.J. — Cooling towers are a relatively inexpensive and dependable means of removing heat from drycleaning machines (DCM). There are other ways to cool your equipment, but if you are paying for electricity and water, a cooling tower is often the most economical.

Cooling towers use the outside air to cool water that is circulated through the DCM’s refrigeration heat exchangers, still condensers and/or solvent coolers.

In an evaporative cooling tower, some of the water being cooled evaporates into a moving air stream. When water evaporates, it removes lots of heat from the rest of the water. Each one pound of water that is evaporated removes approximately 1,000 Btu from the system.

Water lost through evaporation is replaced by what is called “makeup” (city water). Removing heat by evaporation is highly efficient. That’s why you can cool a large amount of water with only a small amount of evaporation.

Warmed water is pumped to the tower inlet. The water flows through the inside of the standpipe and is distributed through the sprinkler arms, located above the fill. (See the diagram.)

The bottoms of the sprinkler arms have a series of holes that are pointed on a slight angle. The water is sprayed out of the holes, and this reactive force causes the arms to rotate. In this way, the water is distributed evenly into a thick maze of corrugated plastic called “the fill.”

Many towers put sails or blades on top of the sprinkler arms to help rotate the arms using the airflow from the fan. At the same time, a large fan, located at the top of the tower, pulls large volumes of air (10k-20k cubic feet per minute) into the tower and out the top.

The air enters the tower through a screened cylinder that wraps around the circumference of the tower just up from the bottom (inlet louver). The air goes through the fill from the bottom to the top. The heat is transferred to the air.

The water flows down the large surface area of the fill, evaporation takes place, the water is cooled and falls through the fill into the collection basin.

At the bottom of the tower, there is a cylindrical protrusion called the “tower sump.” One side of the sump has a large outlet (normally through a screen or filter) that is connected to a large-diameter pipe connected to the storage tank, down below.

In warm climates, the bottom of the tower may be used as the storage tank.

If the sprinkler arms are moving too slow or not turning at all (a very common occurrence), the water is not distributed evenly through the fill.

This means that only approximately 15-20% of the surface area of the fill is being used for evaporation. So, a reduced water-flow rate will affect the rotation of the arm and will reduce the distribution.

In addition, there can be wear and/or failures in the rotating mechanisms, which can disable the arm rotation.

A tower can work well when it is first installed. But over time, the sprinkler arms begin to slow or stop working. Even with the bypass valve wide open, that normally means there is a problem with the rotating mechanisms (spindle or bearing).

If the fan is not working properly and the airflow is reduced, this will directly affect the evaporation and the cooling of the water.

Fans can be rotating in the wrong direction, can be wired with the wrong voltage, or there can be motor or bearing failures. In addition, the inlet louvers can be blocked by leaves or other debris.

The cooling tower shown is not the only type of tower. Other models can have horizontal airflow, and some use fixed nozzles to spray the water instead of using moving distribution arms. However, the fundamentals of water flow, evaporation, distribution and airflow are the same.

HOW DO STORAGE TANKS WORK?

In areas that experience cold weather, cooling tower systems need a storage tank to provide a constant inventory of water for the pump suction and to allow complete cooling-tower draining when the tower is shut down (at the end of the day, or holidays).

The most popular type of storage tank is a plastic, vertical cylindrical tank.

Holes are cut in the wall of the tank for fittings that connect piping. The tank is normally located inside the plant to keep the water from freezing in cold weather.

Cooled water from the tower uses gravity to drain through a large pipe into the tank. The tower’s circulating pump draws water from the pump suction pipe and pumps the water through the coils in the DCM and then up to the tower.

A float-controlled valve feeds fresh water (city water) to maintain the “operating level.” Once established, the operating level should remain constant when the pump is operating. Any evaporation losses are made up by the fresh water inlet valve.

When the pump is shut off, all the water in the tower and the drain line will gravity-drain into the tank, raising the water level to the “shut-down level,” which is just below the “overflow.”

An overflow pipe is installed to prevent overflowing the tank and spilling water onto the plant floor. The size of the overflow line should be larger than the cool water inlet line from the tower and installed without valves.

A drain line close to the bottom of the storage tank can be used to drain the tank for cleaning and for adjusting the shut-down level. The “rise” is the amount the level moves up when the tower is disabled. It is recommended that the float be set so that the rise is 2-3 inches above the overflow. This is called bleeding the tower, or “bleed-off.”

Bleeding results in additional makeup water being added to the storage tank. This is a key part of controlling the water quality. Some storage tanks are installed without float valves, or the float valve is missing.

It is recommended that an automatic feed valve with the float be installed or the original be repaired. If this is impractical, the level and bleeding can be accomplished manually.

First, the level should be lowered using the drain valve. Then mark this level. Second, shut off the tower and wait for it to completely drain. Mark this new level. The difference between the two is the rise.

Let’s assume the rise is 10 inches. Turn on the tower.

Using the manual feed valve, fill the storage tank until the operating level is 8 inches (which equals the rise minus the bleed) from the overflow.

It’s important to know where the levels are supposed to be during operation and during shut-down. You can’t always see the tower, but the tank tells the story. Pay attention!

The author acknowledges that much of the information in this article was supplied by Scott Pariser, Pariser Industries Inc.

Mike Tatch has been assisting dry cleaners with regulatory compliance since 1987. He is an experienced engineer, an OSHA expert, an instructor for the National Cleaners Association (NCA) NYS certification program, and has invented and marketed many different products for environmental compliance. In 2015, he began conducting the required Quarterly Compliance Inspections for New York state dry cleaners.