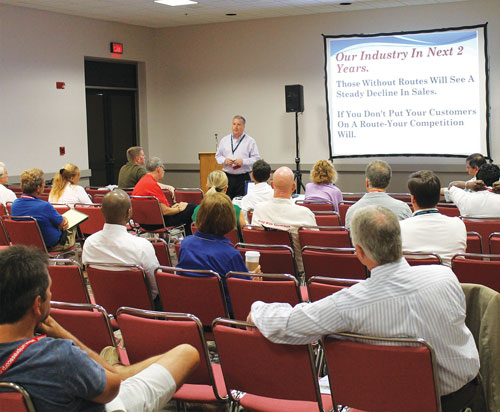 JACKSONVILLE, Fla. — The drycleaning industry is becoming more and more route-competitive, says consultant James Peuster, and he believes businesses that do not offer route service will see a steady decline in drycleaning sales in the coming years.

The Route Pro, as Peuster’s Missouri-based business is called, is well known in the industry for the route consulting and development services it offers. Peuster travels frequently throughout the country for on-site training and coaching.

“I don’t want to be known as the angel of death for drop stores, but there are more and more people closing drop stores now,” he says to an audience at this year’s South Eastern Fabricare Association (SEFA) conference in Jacksonville, Fla.

TAKE YOUR ROUTES TO THE NEXT LEVEL

What must a dry cleaner do to ramp up their route efforts?

“There is a natural attrition that will happen with routes,” Peuster says. “If that attrition overtakes what your route driver contributes (in sales), your route is going to … flatline. What if your driver was more involved, not just in sales but in (customer) retention as well? What would that look like?”

“Are they bringing in new business? Are they getting more skilled in their position? Are they making you money or costing you money?” Peuster asks.

It’s up to the route salesperson to evaluate the quality of a potential customer with the thought in mind of offering minimal or no discount on a first order, Peuster says. It goes back to building loyalty on service rather than price.

Just “having the van” is not enough to offer good route service, according to Peuster. Also, it’s up to management to balance route personnel motivation and accountability; your long-term goal is to have a 50/50 split.

“Accountability is not finger-pointing and assigning blame. It’s repercussions for not living up to the responsibilities you’ve laid out. … The motivation is always (linked to) money.”

Competing in today’s market means you have to separate yourself from the competition, Peuster says, “not do what your competition does and hope that you just happen to be the dumb-luck guy that when (a customer) just happens to get that direct-mail piece decides, ‘I’m ready to change my dry cleaning today.”

And what should happen if you put off offering route service, or stand pat with what’s already in place?

“Each day you wait, your competition is solidifying their routes,” he proclaims.