CHICAGO — At Clean ’19, drycleaning owners could find everything they were looking for to help them improve their businesses. The show was upbeat, personable, and full of great ideas! That gave everyone lots to strut about at the big show back in June in the Crescent City. Exhibitors and attendees alike described it with the phrases: “quality show”and “positive attitude.”

Let’s get some basics out of the way: Was Clean ’19 in New Orleans a success?

Because many exhibitors and drycleaning attendees over the four hot, steamy, muggy June days in the Crescent City, that I talked to at the show, told me so in a resounding way. Clean ’19 was, in effect, a “jazz-infused jam session” of great ideas, if you will, where fabricare industry manufacturers and attendees came together to lay down some upbeat vibes all their own.

The convention center was nicely air-conditioned and kept the 430 exhibitors and 11,000 show attendees cool — and that was wonderful when the heat outside was 110! The show sold out space at 224,500 sq. ft., notes Messe.

What made Clean ’19 a big success?

....For that we’ll take some comments:

“Having a positive attitude makes a difference not only in your sales, but in your life,” says early morning (before the doors even opened) first day speaker at Clean ’19, Bruce Hamilton, author of No Bad Days. He set the tone.

Those words would prove true over and over, in many subtle tones and bold notes, all during the Clean Show held at the Ernest Morial Convention Center.

Brian Harrell, drycleaning owner of Shores Fine Dry Cleaning, based in Winston-Salem, N.C., exemplifies that positive attitude on the first afternoon when he says to me, with delight on his face, “I’m on a mission, and I’m finding everything I’m looking for here at the Clean Show.” Then a pause, “Great show!” he exclaims, then continues up the busy aisle with a big grin and a great attitude.

Attendees brought their energetic, vibrant ‘tudes to Clean ’19, and made business connections and learned new things in many ways: At the booths; by chatting with each other at events and in the aisles; and at the great educational sessions, which were hosted by the Drycleaning & Laundry Institute (DLI) and the other show sponsors across all four days.

Bobby Patel, owner of Kona Cleaners and a partner in the BeCreative360 web design company, gave a talk on Marketing Then & Now to a standing room only packed house session later that first day.

“I came from India. I started out as an owner knowing nothing about dry cleaning,” he says, deep voice filling the session arena.

“At first I walked around just trying to understand the business. Changes were needed. I remodeled my store; my business started going up!”

Pens are starting to write and the glow from cell phone screens are popping up by the dozens.

“Deal with negative feedback right away,” Bobby says. “That’s the biggest thing I do. Do whatever it takes. If the customer says the price is too high, I give them a full refund, whatever the cost. Put your ego in check and fix the problem! Don’t remove that negative post. Make customers happy. They’ll remove it themselves.”

You can hear a pin drop.

Patel changes the tone seamlessly: “I found out what ‘Kona’ meant and so I put in a fish tank right in my store — it calmed down the customers who were pissed off at me!”

The audience roars. And I mean ROARS!

Attendees taking notes like crazy. Bobby is a sensation at Clean ’19!

Two young drycleaning owners waiting in the long line to talk to Patel afterward finally got their chance. I was keeping an eye on them and hanging nearby and could hear them. They say: “Incredible Bobby!” Their faces are lit with excitement. “We’re new to the business. So many great ideas.”

“Come by the booth later and we’ll talk,” Patel smiles. “I’ll help you with anything you need. Anytime. I’m so glad to!” They leave on a cloud!

That scene was so far over the moon in ‘positive attitude’ vibes that it gave me chills. So much goodwill here in fabricare. And it carries to the show floor all that day and throughout all four days in so many ways.

The exhibitors and sponsors were happy with the show and a little over the moon as well.

Here’s the upshot: Sales were made; seeds of ideas were planted; and that groove beat of fabricare connecting in quality ways was so very positive indeed!

Husband and wife drycleaning owners Matt and Kim Bizzack, who started their business in 1999, celebrated their anniversary of 20 years in business at Clean ’19. They paused to tell me in a busy aisle toward the back of the venue: “We are buying a new machine here. Our business is all about quality and service,” Matt says.

“We started wet cleaning two years ago. We have one plant and five drop stores. We’re Legend Dry Cleaner in Phoenix, Arizona. We’re having a blast here,” he adds.

He’s not the only one. A little while later, near the front of the show entrance, I meet dry cleaner Garry Jackson from Peerless Cleaners, Corpus Christi, Texas. “I’m here looking for bar-coding and it’s a great show.”

Jackson tells me he’s been in the drycleaning business for 28 years and has seen quite a bit.

Have you been to any of the educational sessions? 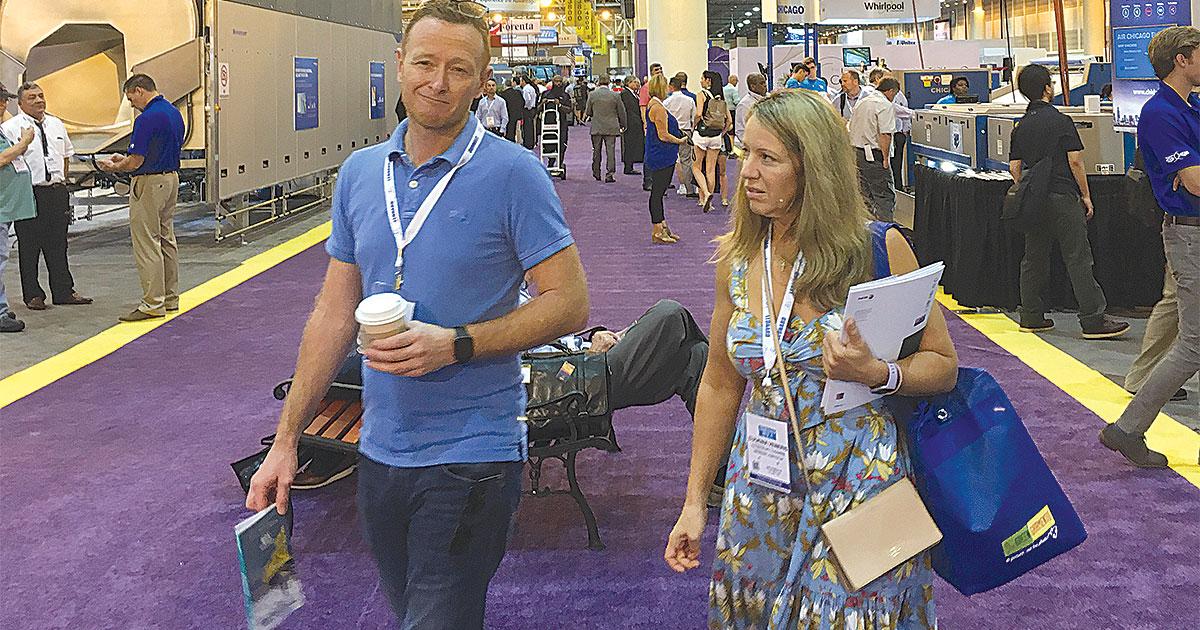 The Clean ’19 Strut!  It’s about having a positive attitude. It’s about finding everything you’re looking for, as an attendee drycleaning owner. It's about connecting as an exhibitor at the Clean Show. There was lots to strut about at the recent 'big show' in New Orleans, described by many of the 430 exhibitors and 11,000 attendees with one word: “Quality!” (Start that Bob Seger Strut song!)  (Photos by Tim Burke) 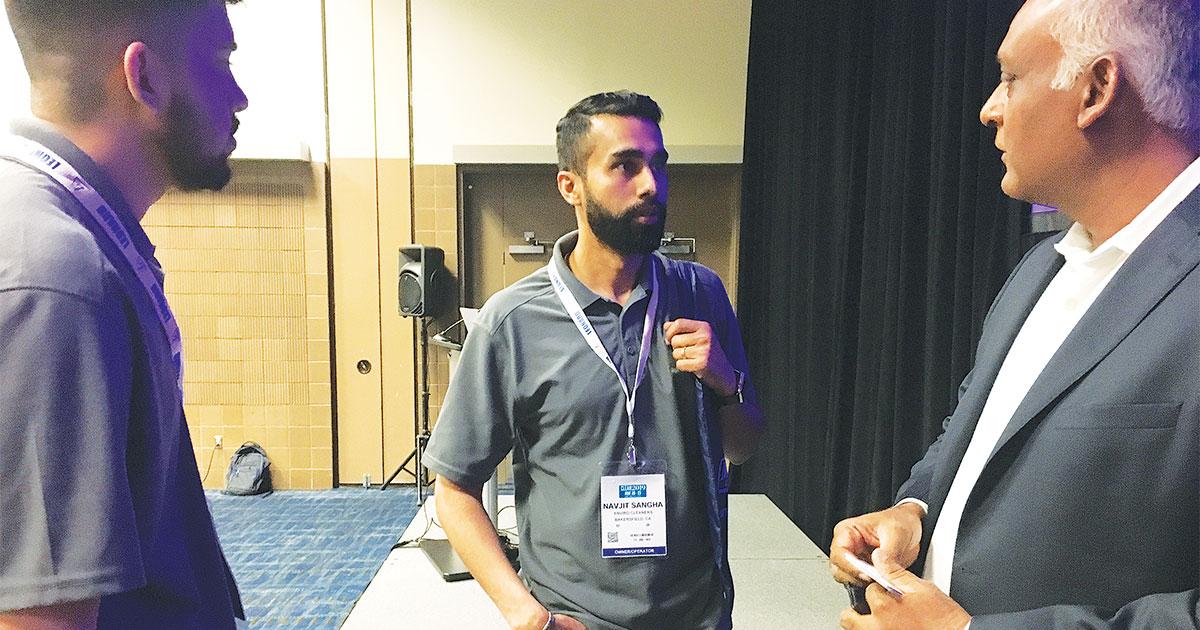 Learning Is Now In-Session, And How!  Bobby Patel, on right, owner of Kona Cleaners in Orange, Calif., talked to a standing room only crowd in his educational session on Marketing on the first day at Clean ’19. He says not to let those negative online reviews stay. “They can cost you. Put your ego in check and fix the problem! Don’t remove that negative post. Make customers happy. They’ll remove it themselves!” These two new drycleaning owners are wowed by Patel, they say: “Incredible Bobby!” 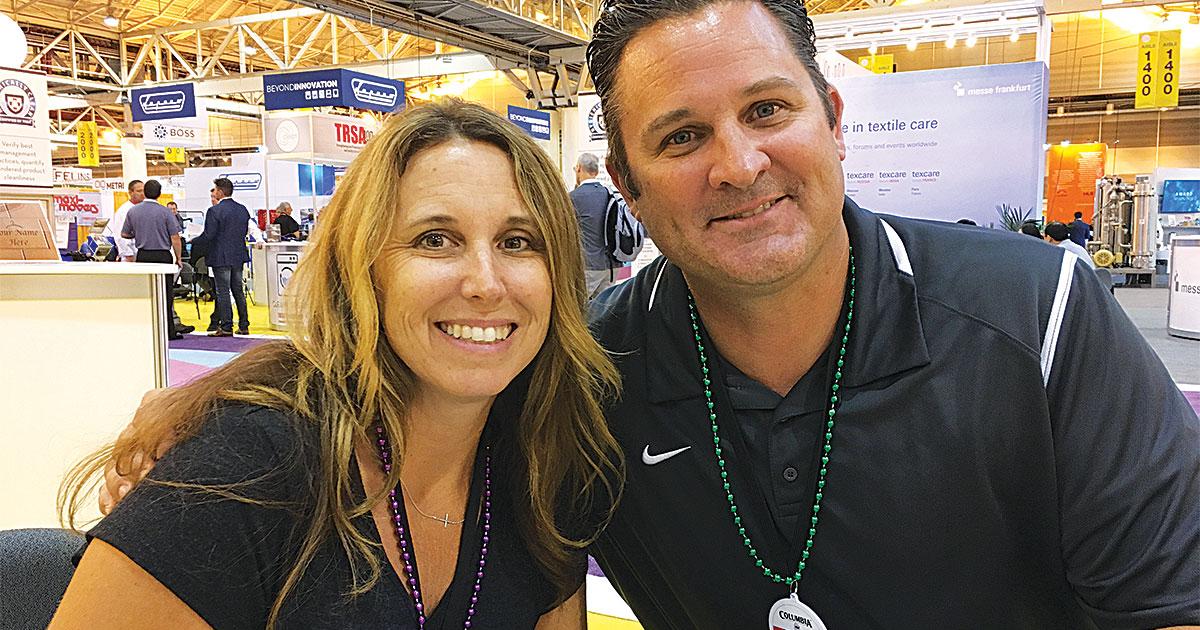 Happy Drycleaning-Moon!  Matt and Kim Bizzack, owners of Phoenix, Ariz.-based Legend Dry Cleaners, visited Clean ’19 for the purpose of, “buying a new machine. We started with wet cleaning two years ago. We have 32 employees, one plant and five drop stores. Our business is 20 years old this year. We are celebrating our company anniversary here at Clean,” they laugh. 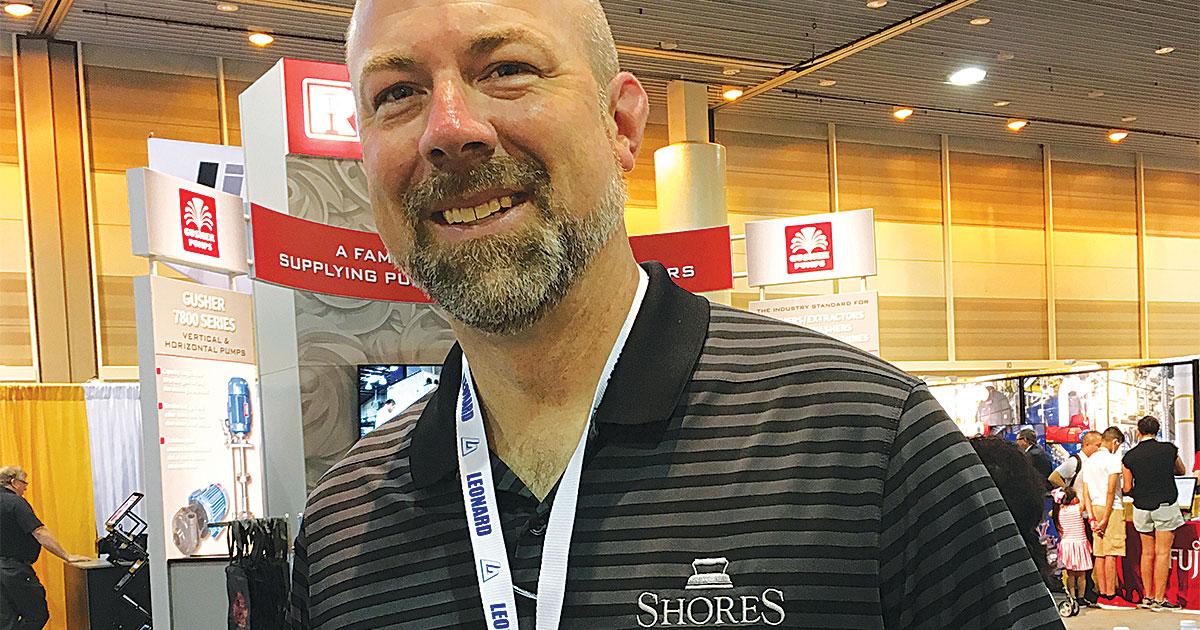 Mission: Possible!  Drycleaning owner Brian Harrell, from North Carolina, exemplified the positive attitude that flowed so strongly throughout all of Clean ’19, on the show floor and in the many educational sessions. He was, “On a mission to find everything I’m looking for! Great Show!” The Clean Show grooved like a great, hot jazz number the host city of New Orleans is known for.