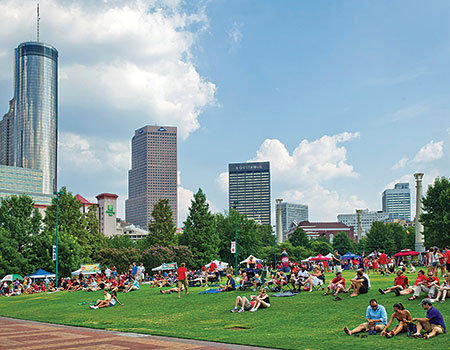 When not at show, explore city Clean is calling home April 16-19

ATLANTA — After 28 years, the Clean Show returns to Atlanta. For those of you planning to attend, when you aren’t eyeing the new products or attending educational sessions, exploring the city will keep you entertained.

Pack your walking shoes and comfortable clothing, because Atlanta has an abundance of attractions.

In downtown is the Georgia World Congress Center, the exhibit space for the Clean Show. Adjacent to the Centennial Olympic Park and conveniently located near major shopping centers, dining and transportation hubs, this spot makes for convenient Atlanta sightseeing.

Historically, the average high temperature in Atlanta in mid-April has been in the low 70s, with the average low in the low 50s, according to U.S. Climate Data.

That mild spring weather sounds like an ideal vacation, right? When not on the show floor, get out and about to explore the city the Clean Show is calling home April 16-19.

Once you’ve landed in Atlanta, what’s the best way to get to Clean 2015?

Getting to a hotel from Hartsfield-Jackson Atlanta International Airport will require hailing a taxi, renting a car or buying a bus ticket.

A taxi to downtown runs about $32 for one person, according to Checker Cab.

A ticket for the SuperShuttle, a shared-van shuttle service, runs around $16.50. This is for a one-way ticket from the airport to Centennial Olympic Park.

Multiple car rental services are available at the airport, including Budget Rent A Car, Avis Car Rental, Hertz and more.

The Metropolitan Atlanta Rapid Transit Authority (MARTA) is the city’s public transit system. To get from the airport to downtown, the MARTA website says travel takes about 20 minutes and costs only $2.50.

According to Frommer’s, rush-hour traffic in Atlanta can be a challenge, so it recommends MARTA. Trains run north-south and east-west, and intersect at Five Points Station downtown.

For more information about fares, schedules and routes, visit www.itsmarta.com.

The Atlanta Streetcar, which debuted in late December, has 12 stops in the downtown area. Stops are near sites such as the Georgia Aquarium, Georgia World Congress Center and Historic Oakland Cemetery.

To ride the streetcar, passengers will need to purchase a Breeze Card, the same payment system used for MARTA. A one-way trip costs $1, a one-day pass costs $3 and a weekly pass is $11. Service times vary; a timetable and more information can be found on www.streetcar.atlantaga.gov.

If a taxi is preferred, Frommer’s says it’s often best to call for one. Downtown fares start with a flat fee of $5 for one passenger and a dollar for each additional rider. These rates apply when going multiple miles away or just a few blocks.

Ride-hailing services such as Uber and Lyft can be convenient, as well.

Simply download the app of your preferred company, enter your information, and request a ride. These services are often less expensive than taxis, but watch out for surcharges, which can occur when the company sees high volumes of ride requests.

Shuttle buses arranged by Clean Show management Riddle & Associates will pick up and drop off attendees to and from the World Congress Center, with routes to nine of the Clean Show official hotels.

The following hotels are within walking distance of the show, so shuttles will not be provided: Embassy Suites at Centennial Olympic Park, Hilton Garden Inn and Omni Hotel at CNN Center.

This schedule is subject to change, according to Riddle & Associates.

From being burned by Sherman’s Army in 1864, to hosting the Summer Olympics in 1996, Atlanta has come a long way.

As the last of the 13 original colonies, Georgia was named after Great Britain’s King George II.

Previous names for the city were Terminus, then Marthasville. It wasn’t until 1847 that “Atlanta” was adopted. This is said to be the feminine form of “Atlantic,” and was possibly coined by a Western & Atlantic engineer, according to the Atlanta Convention & Visitors Bureau (ACVB).

When the Civil War broke out in 1861, Atlanta’s railroad and supply depot was crucial to the Southern armies. However, in 1864, Union Gen. William T. Sherman’s armies burned the railroad facilities, other businesses and residential homes in an effort to immobilize transportation.

But Atlanta bounced back. By moving the Georgia capital from Milledgeville to Atlanta, new business was attracted.

By the 1920s, a downtown business district was established, and because of the campaign of Atlanta Alderman William B. Hartsfield, a racetrack-turned-airport was built.

Under Mayor Maynard Jackson, it was modernized in the 1970s. In 2004 the airport gained its current name, Hartsfield-Jackson Atlanta International Airport,
celebrating the two.

In 1963, Atlanta Mayor Ivan Allen Jr. testified in support of the Civil Rights Bill, making him the only Southern mayor to do so, according to the ACVB.

When King was assassinated in 1968, Mayor Allen pleaded for the city to remain calm. Atlanta mourned peacefully.

In 1996, Atlanta hosted the Centennial Olympic Games, the largest, according to ACVB, attracting 2 million viewers in person, and broadcasting to another 3.5 billion.

Along with the success of the Games came tragedy. On July 27, 1996, a 40-pound pipe bomb exploded in the park, killing two and injuring more than 100 others, according to CNN.

The ACVB says that the Olympics “served as a catalyst for a second resurgence of Atlanta,” with new attractions and developments, the expansion of the airport and an overall higher reputation.

The Georgia Aquarium opened in 2005, and the World of Coca-Cola relocated downtown, leading to a popular attraction.

Atlanta has also played host to events such as the 1988 Democratic National Convention, Super Bowl XXXIV in 2000 and the 2008 NHL All-Star Game.

Check back Tuesday for Part 2!