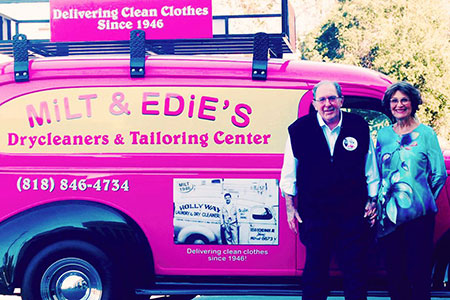 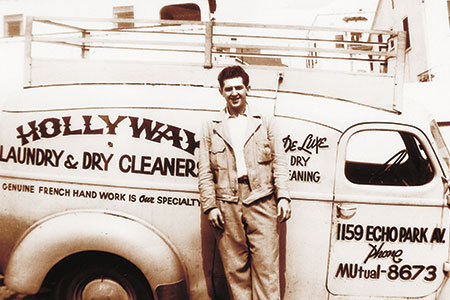 BURBANK, Calif. — Highlighted by a vintage 1946 GMC delivery truck parked at his store — just like the one he drove for his father’s cleaners — Milt Chortkoff will be celebrated for his 70 years in the drycleaning industry Feb. 15-29.

Chortkoff, who turns 87 this year, is the owner of Milt & Edie’s Drycleaners & Tailoring Center here in Burbank. He was just 9 months old when the stock market crashed in 1929, and times were tough for the son of an immigrant tailor growing up in Brooklyn. In 1946, after his family moved to Los Angeles and his father bought Hollyway Cleaners, the 17-year-old began delivering laundry and cleaning around Echo Park and Silverlake.

“Seven decades doing something that you love to do is an epic achievement worth celebrating and Milt deserves to be honored,” says Michael Shader, director of special projects. “We have a lot of promotions taking place for this milestone event, including free daily drawings for store gift cards loaded with $70 in free services. Plus, we’ll be giving away jelly beans, lint rollers and even selfie sticks throughout the last two weeks of February.”

The selfie sticks may come in handy for another celebratory promotion: customers will have $10 in free services credited to their accounts if they take selfies of themselves around the company’s premises, with staff members, or with the newly restored delivery truck and then post the images on Facebook.

“We’re actually hoping for a lot of photos with the vintage truck since it was such a labor of love finding the exact model that Milt drove back in 1946 and overhauling it to be a testament to Milt’s accomplishment,” states Shader, noting that it took more than three months to refurbish the vehicle once it was shipped to Burbank from where it was found in Alabama.

On Sunday, Feb. 21, people are invited to meet Milt — and Edie, too — at Milt & Edie’s from 4 to 5 p.m. Milt just might reveal the “secrets” to his success — striving to continually improve customer service and having a sense of humor are two — and there will be celebration cupcakes and other refreshments available.

Daily trivia contests will appear on the company's Facebook page during the celebration period. According to General Manager Robert Shapiro, trivia questions will focus on 1946 social events, sports and music “so everyone should be ready to Google their fingers off to find the answers and potentially receive credit to their accounts.”