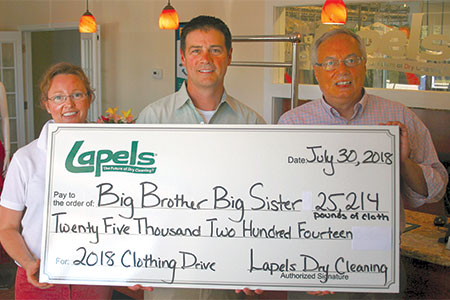 “We can’t thank our franchise owners across the country enough, and of course our customer base, for helping us to give back to the Big Brother Big Sister Foundation,” says Kevin Dubois, owner.

The company’s stores in Arizona, Connecticut, Massachusetts, Michigan, Missouri and New Jersey participated in the drive, which started on April 7 and ended on Earth Day, April 22, the firm notes. More than three dozen locations contributed to the drive.

“With these kinds of drives, a pound of clothing is roughly equivalent to $1 in cash,” says Steve Beck, executive director of the BBBSF. “Raising essentially more than $25,000 in a clothing drive is quite an accomplishment and something all the donors and participating Lapels owners should be very proud of.”

Within its network, the drycleaning franchise challenges its individual stores to be the largest collector of garments and awards prizes to the franchise owner with the largest amount of donations.

This year’s winner was Kimberly Wilkinson, owner of Lapels Dry Cleaning of Marshfield, Mass., who was able to donate more than 15,000 pounds of garments to BBBSF, the company notes.

Part of that 15,000 came from Wilkinson and her team volunteering to clean and dry many of the garments discarded at the start line of the Boston Marathon. With this year’s heavy rains at the start of the race, the cleaners writes, there was a need for someone to help to maintain the integrity of those garments. Wilkinson and her crew sprung into action, cleaning truck loads full of clothes at a moment’s notice.

“The clothing that came in from the Marathon was in really tough shape. It truly is a testament to the way Lapels Dry Cleaning locations clean clothes that we were able to salvage clothes from that day so that the BBBSF could use them for resale,” says Wilkinson, who, besides Marshfield, also owns stores in Cohasset and Kingston, both in Massachusetts.

The firm describes itself as having, “Pioneered an eco-friendly dry-cleaning experience over the past 18 years. Part of that effort includes a partnership agreement with GreenEarth® Cleaning, the drycleaning industry’s only non-toxic cleaning alternative.”

The clothing collected is now being sold by high-end thrift stores, the cleaner points out. The net proceeds from these sales are donated to BBBSF mentoring programs for young girls and boys in participating states.

“We can’t thank Lapels enough for their efforts in putting together this record-setting clothing drive,” says Beck.