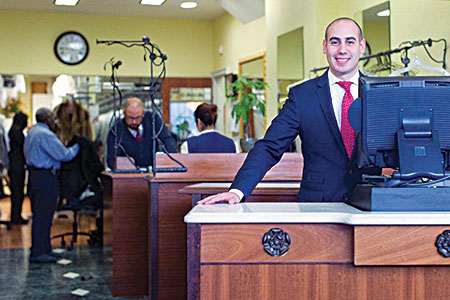 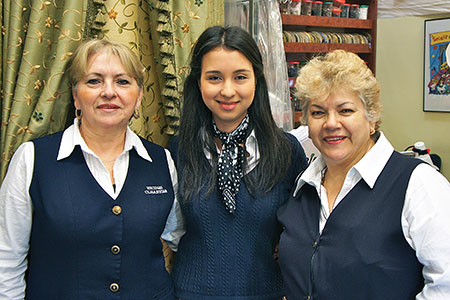 NEW YORK — The Columbia (University) Aging Center recently launched the Age Smart Industry Guides, one of which prominently featured Bridge Cleaners & Tailors. The Brooklyn business, owned by the Aviles family, has a workforce that ranges widely in age, and the comfort of staff is important to management.

In a recent press conference promoting the Industry Guides’ launch, Richard Aviles, co-owner of Bridge Cleaners & Tailors, spoke about his company’s position on employing older workers and how important they are to Bridge’s success.

Aviles’ parents started their business about 45 years ago, and he began working there about a decade ago. They own three locations, all in New York City: Bridge Cleaners & Tailors, King Garment Care, and a production facility in the Brooklyn Navy Yard.

He mentioned those “interesting years” during the press conference, describing the major damage inflicted on the production facility by Hurricane Sandy. The business had a couple weeks after the storm to rebuild, so Aviles sat down with the production team to discuss ideas for creating a better work environment.

Of all the ideas for rebuilding, 90% of the “best” ideas came from team members, not upper management, he explained.

“If they’re going to be working there eight, nine hours a day, it’s important that they work where they love,” he says. “We wanted anyone, when they got to their workstation, it has everything that they need to produce the best quality that they could and then also feel as comfortable working in that space as they could.”

Bridge Cleaners & Tailors is an industry leader in New York City, Finkelstein says. “They do very high-end work. … When we interviewed them, we were … really incredibly impressed by the number of sort of thoughtful things that they had done that were very specific and very possible for others to do.”

She notes different considerations the business took for its workers:

“We were really impressed by the way that they spoke about the value added of their experienced workers,” she says. “It’s the older workers that look at the piece of clothing overall and understand not just what their little role is, but also what that thing needs to look like when it’s done. … And that’s that value of knowledge and experience as well as your sort of orientation to turning out the best possible product.”

Aviles stated during the press conference that there is a “tailor shortage” in New York City.

This shortage plus declining expertise in other industries are among reasons to hire older workers, as emphasized in the Age Smart Industry Guides. Dorian Block, who researched for the guides, interviewed 100 businesses, asking them about staffing challenges and age in the workplace.

“What businesses told us is that in order to succeed, they must also focus on retaining the expertise that they have in their current experienced workers,” she says. “They also need to develop systems to pass on the knowledge of the current workers to the new workers coming in.”

The average age of manufacturing workers in the United States is 56, the Columbia Aging Center says, citing an NYCEDC report. Additionally, the U.S. Bureau of Labor Statistics states that if workers continue to retire as expected, there will be a shortfall of 10 million skilled manufacturing workers by the year 2020.

Aside from the need to have skilled workers, Finkelstein says there are other benefits to hiring older workers.

“Many of the older adults that we speak with want and need to work,” she says, speaking during the press conference. “Furthermore, there’s growing evidence that it’s helpful to their healthy aging and their well-being to continue working.”

Finkelstein says the industry guides provide “a distillation of our research to bring good experiences to light from small businesses in New York City in order to influence the behavior of other small businesses, because they may recognize that some small adjustments to practice will yield great benefits to their bottom line and their pursuit of mission.”

Aviles advises drycleaning business owners to observe their shop’s numbers as well as the working environment of employees.

“There’s an intangible of taking care of the people you work with that’s so difficult to quantify that always pays back in dividends,” he says.

If you missed Part 1 of this story, you can read it HERE.