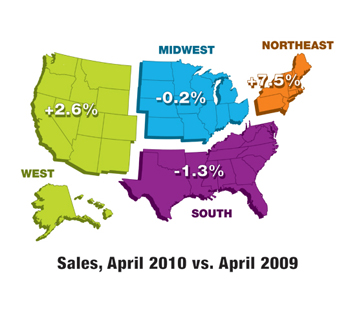 CHICAGO — April sales grew in two regions of the U.S. compared to last year, fueling hopes that the worst of the recession may be coming to an end.
While April 2009 was likely one of the worst on record, more drycleaners in the Northeast reported year-to-year growth, bringing the average sales increase for April 2010 to 7.5% from April 2009. Operators in the West saw sales grow an average 2.6%.
Drycleaners in the South weren’t so lucky, reporting an average year-to-year decline of 1.3%. And although those in the Midwest were twice as likely to report sales declines, particularly strong sales among those reporting an increase helped bring the average sales decline to a statistically flat 0.2%.
Nationwide, operators averaged a 0.9% increase in sales. “It’s very slow, but showing some improvement,” says an operator from the South. “The season was late to start. I’m still wondering how the summer will be in relation to last year’s horrific numbers.”
Many operators were forced to slash payrolls during the recession to cut costs. Asked if they had increased or decreased payrolls since this time last year, more operators say they cut payrolls, representing a nationwide 3.2% decline in costs.
Operators in the Northeast led with the most aggressive cost-cutting, with the average payroll declining 5.9%; the Midwest followed, averaging a 5.2% decline in payrolls. Widespread cost-cutting in the West and South produced dips of 2.5% and 1.6%, respectively.
Payroll cuts may be a lagging indicator. “I see a turnaround in the economy, but sales are unchanged from the first two quarters of last year,” says another Southern operator. “It wasn’t until the last two quarters [of 2009] that we started to see a sharp decline, which led to layoffs and payroll cuts.”
A few operators said that the recession is only partly to blame problem for weak drycleaning sales. “The industry’s major problem is that people don’t dress up to go out, whether to the theater or to restaurants,” an operator calling himself “depressed but well groomed” says.
“There was a time people dressed to take a flight; now jeans and an open shirt or a sweatshirt is more prevalent,” he adds. “Churchgoers, many of them look like they just rolled out of bed. God may not care what they look like, but I do.”American Drycleaner’s Wire surveys readers every month on a variety of issues facing the industry. While the survey presents a snapshot of readers' viewpoints at a particular moment, it should not be considered scientific.