BURBANK, Calif. — When Milt Chortkoff retired from dry cleaning in 1983, he was an old hand at it. Having started out at his father’s plant, Hollyway Laundry & Dry Cleaners in the Echo Park neighborhood of Los Angeles, in 1939, he had already spent more than 40 years in the trade. It was, he thought, time for rest and relaxation. And so Chortkoff and his wife, Edie, retired to travel the world.

And after just a couple of years, “I got very bored,” he says.

Powerless against the pull of the business he grew up in, and eager to champion the service credos he had learned throughout the years, Chortkoff re-entered dry cleaning as a consultant. And soon enough, he found himself consulting at a plant that he could buy and run as his own. “I love the action,” he says. “After all, I’ve worked in a cleaners since I was 10 years old. I just love the business.”

Chortkoff bought the 4,000-square-foot Regal Cleaners plant in 1989, outfitted it with hot-magenta awnings and rechristened it Milt & Edie’s. Since then, he has built the Burbank-based operation into a single-store powerhouse with a full range of dry cleaning services and a variety of ground-breaking marketing and promotional strategies.

The plant offers a full range of clothing-care services, including fluff ’n’ fold, shoe repair, suede and leather service, reweaving, wedding gown preservation and pillow cleaning, as well as free pickup and delivery and mobile tailoring within a five-mile radius. Inside the plant, a maitre d’ or hostess directs customers to one of Milt & Edie’s nine counters to eliminate waits.

Tailoring and alterations, which accounts for an astonishing 20% of Milt & Edie’s revenues, is now available “instantly” from 4 a.m. to midnight with the operation’s addition of a 10th tailor, adding to the 24-hour initiative’s surge.

“We’re getting busier and busier—we’re up 10% over last year, and we’ve grown more during our regular working hours because [people] know that we’re open 24 hours a day,” Shapiro says. “It’s going viral—we get hundreds of new customers per week.”

Milt & Edie’s was quick to tap into the promotional possibilities of social networking. The operation updates its Facebook page frequently with quotes, photo caption contests and a sort of geography quiz based on the origins of its incredibly multicultural staff (some 11 languages are spoken on the production floor). The operation rewards those who interact with the operation electronically with free cleaning. The business has more than 2,600 “fans,” and is adding more at a rate of about 200 per month.

The company was fast to adopt web couponing strategies, too, saving money on printing and postage by converting its twice-a-year new-customer pushes from direct mail to electronic clearinghouses such as Groupon. “We get over 1,500 new customers on Groupon, and about half of that on Living Social,” Chortkoff says. “It used to cost a fortune in mailing, but getting new customers on Living Social is no cost to us.”

New customers receive a welcome kit that includes an express bag, and the plant’s customer-service manager follows up with a call thanking them for their business. Then—since it’s an industry truism that 80% of all business comes from 20% of customers—the operation concentrates on retention. Milt & Edie’s rewards regulars with gift certificates based on their quarterly spending, and the point-of-sale (POS) system targets people who haven’t repeated for 60 days or more. “We have built an incredible brand loyalty,” Shapiro says. “One customer who had to go to another cleaner out of town said he felt like he was cheating on his wife.”

Milt & Edie’s is active in community charity efforts, and has won the Burbank Leader’s Best of Burbank Reader’s Choice Award four years in a row. In June, the operation garnered effusive coverage from the Los Angeles Times for unveiling a mural depicting the history of dry cleaning that takes up the entire backside of the building. “People in the community are going crazy over it,” Shapiro says. “Why Milt has been successful is that we’re constantly doing and trying new things.”

That adventurous spirit has paid off. When Chortkoff bought the plant 23 years ago, it did about $500 per week in sales; now, it averages a whopping $85,000 per week and occasionally breaks into the low six figures. “We’re in uncharted territory as far as sales figures go,” Shapiro says.

Chortkoff boils down Milt & Edie’s success to two dictums of five words each: “Quality Work, Delivered on Time,” and “All Customers Leave Happy, Always.” If you and your staff give every customer respect and make good on your promises even after a service hiccup, he says, they’ll keep coming. “We want you as a customer for life. We want your children; we want your grandchildren.

“Most cleaners spend their time in the back of the plant,” he adds. “You have to do quality work, but the dry cleaning business is all service—just like a five-star hotel or a good restaurant. Everything is in the relationship you have with your customers. You can have the greatest quality in the world, but if you don’t get a smile from the counter girl, it’s worthless.” 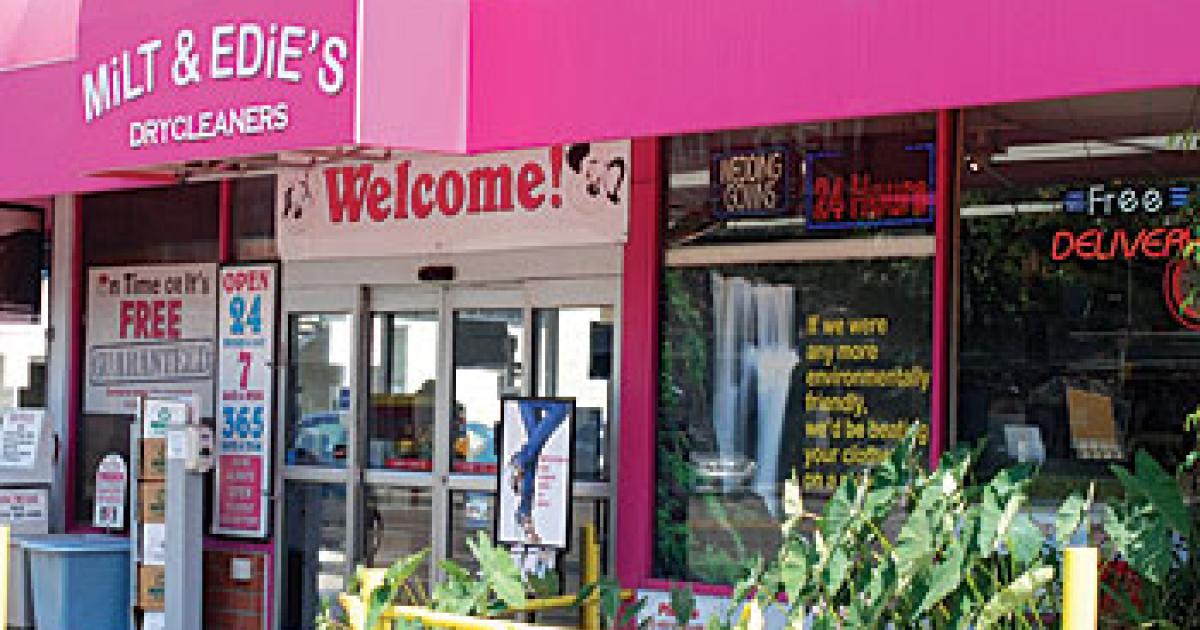 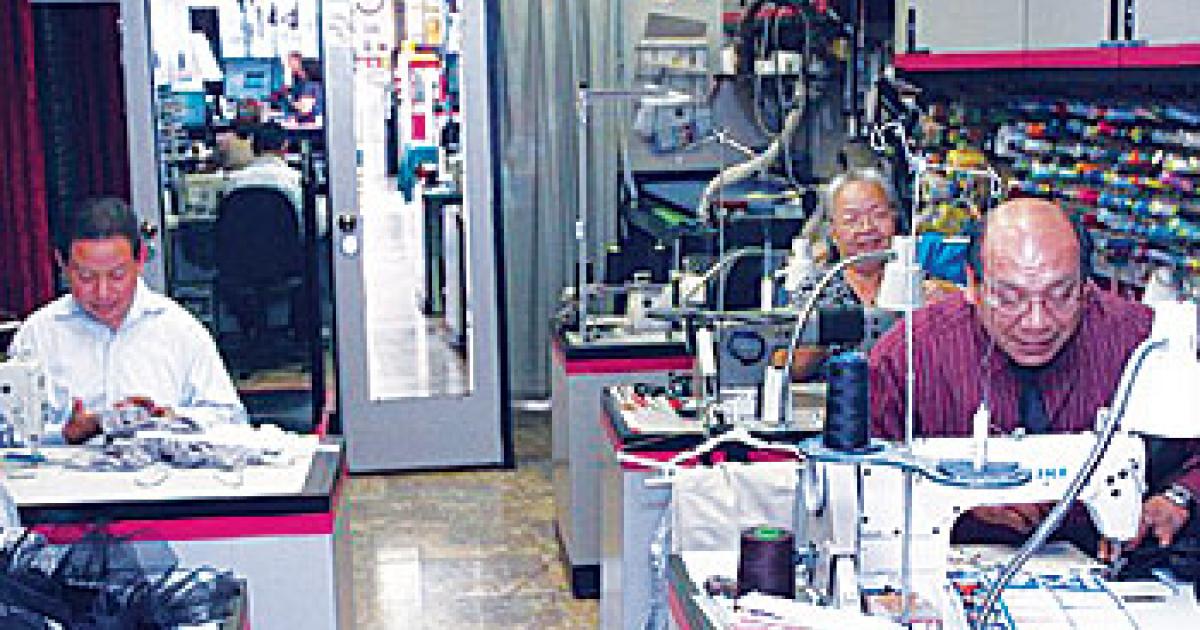 Tailoring and alteration—which accounts for 20% of the Milt & Edie’s revenues—is available “instantly” from 4 a.m. to midnight. 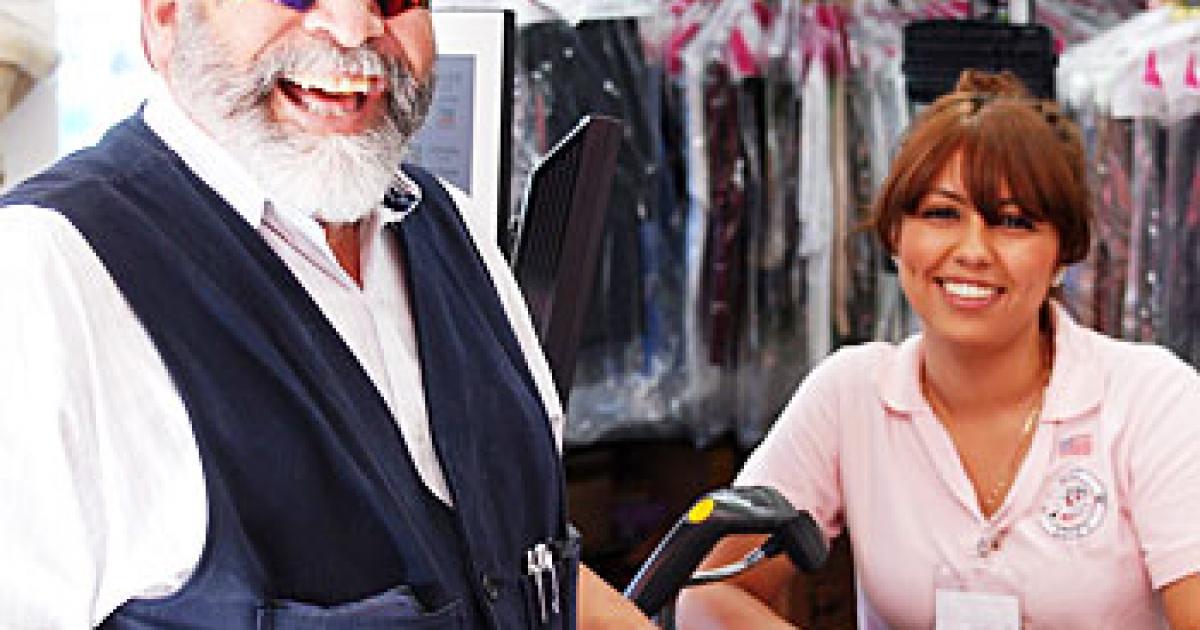 “We have built an incredible brand loyalty,” says General Manager Robert Shapiro. “One customer who had to go to another cleaner out of town said he felt like he was cheating on his wife.”

Have a question or comment? E-mail our editor Dave Davis at [email protected]ags.com .