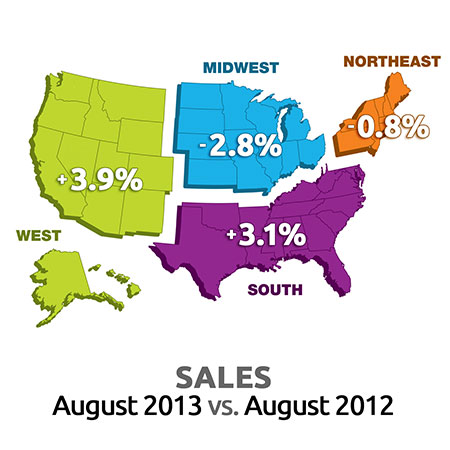 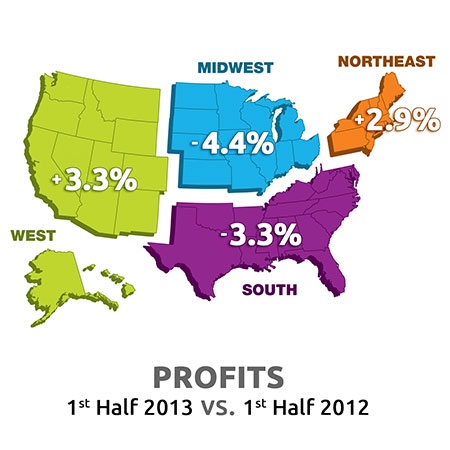 CHICAGO — Dry cleaners in the West reported a 3.9% increase in year-over-year sales last month, the largest for August among all regions, according to results from this month’s American Drycleaner StatShot survey.

Cleaners from the West also posted the strongest jump in first-half 2013 profits, up 3.3% over first-half 2012 profits. Despite the gains, some from the region have a contrary tone about market conditions.

“Economy is still dragging on,” says one dry cleaner there. “[I saw] another dry cleaning plant close nearby. Still in survival mode.”

“After doing quite well just before the ‘depression’ hit, things have been on a slow decline and have leveled for the most part in the past two years,” says another cleaner in the West. “We are now at a very perilous point in spite of our efforts.”

Some cleaners there reported tepid growth in the face of a struggling local economy.

“We have had about 12% sales growth thus far in 2013. August results, however, are a bit disappointing,” says a dry cleaner from the region. “Cost increases associated with a new delivery route and additional management expense have consumed additional revenue. It is nice to be stable and see a bit of growth, however.”

While the Northeast saw a minimal decline in August year-over-year sales (down 0.8%), its first-half 2013 profits were up 2.9%.

“We keep getting new customers every day,” says a cleaner from the region. “We are in the high-end market and there is still great demand for our services.”

“Economy and casual attire continue to [negatively] impact [business],” says another cleaner there.

“Market conditions remain weak, although shirt volume is up the last three months, and this is with a price increase” says a Midwest dry cleaner. “Attitude is still cautiously optimistic.”

“I am guardedly optimistic,” adds another cleaner from the region. “There is currently a large construction project in our area that has the potential to help drive the local economy in a positive way and is beginning to show its presence.”